I am a top breeder of Doberman Pinschers. I have earned the title:  AKC Breeder of Merit.

These dogs do not just represent beauty. They also represent correctly bred temperaments; as several of the above also have their Working Aptitude or Register of Merit Certificates. This is a temperament test evaluated by the Doberman Pinscher Club of America as to the fitness of the dog in its ability to be both companion and protector. Thus, Black Bart Dobermans are a delight to own.

I do not often breed litters; however, I currently have a litter from the above stock. To breed a good dog, one cannot just go to the local dog available. This is one of the reasons Black Bart Dobermans produces top dogs. The dog needed, is not often the local dog. Much thought and experience go into each breeding. This produces the qualities that both win in the show ring, and win with their chosen owners.

The reality of experience

My first Doberman became part of me in 1971 and subsequently, began a breeding program in the 1980’s under the name Perseus. I returned to competing, showing, and breeding in the 2000’s, after some time away with college, and raising two children. With 30 years of experience, now I breed under the name Black Bart Dobermans. 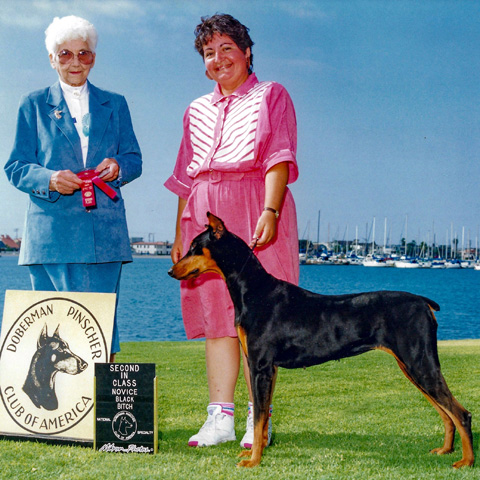